skip to main | skip to sidebar

About 4 years ago, I signed up for a basket class at Hill Institute in Northampton, MA. Our teacher, Karen Sullivan is such an inspiration. She is meticulous and is a wealth of information. Her class is the best. I look forward to each session with great anticipation.

This wall basket hangs in my bathroom and holds seasonal flowers. 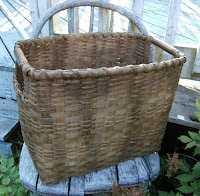 I needed a basket to hold winter hats and mittens, so I made this rectangular basket with cut out handles made of copper pipe. I have another similar that I use as a magazine basket. I always have a use in mind before I begin a basket. I tend to gravitate toward larger, utilitarian baskets. 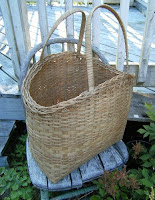 This 'shopping basket' is by far the most labor intensive basket. I spent over 8 hours weaving it. It's great for day trips, carrying extra clothing, blankets for picnics, or towels for the beach. I've made 4 and gave away 2 as gifts. I don't expect to make any more...too much work!! 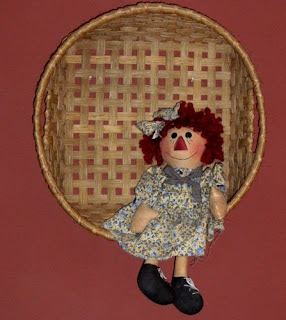 I made a beautiful doll using a pattern by Sherry of Annie's Cupboards. She needed a special home...so I made a round basket that I intended to hang on the wall so my dolly would have a special place to sit. 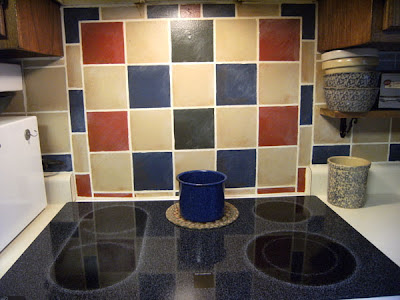 About 4 years ago, I purchased a glass top stove. The backsplash was crying out for something dramatic. Being the impatient person I am, I wanted something, and I wanted it NOW!! I didn't have the time, patience, or knowledge to add tile. So, I opted to paint "tile".

The most time consuming part was the planning and measuring. I decided on 4 inch "tile", but found that it would not center evenly under the range hood. Therefore, I opted to add vertical tile to either side to make up for the imbalance. I used the existing beige paint as the "grout" by using 1/4 inch quilting tape as my "grout line". The "tile" was painted using regular craft acrylic paint. Fortunately, it dries quickly...another plus for impatient people like me. I added shadowing using glaze mixed with dark brown paint then added some dry brushed white paint for highlights.

Three coats of polyurethane were added when all the paint had dried sufficiently. I've washed it many times, and it has held up very well. My goal to fool family and friends worked...everyone thought I had tiled the backsplash. 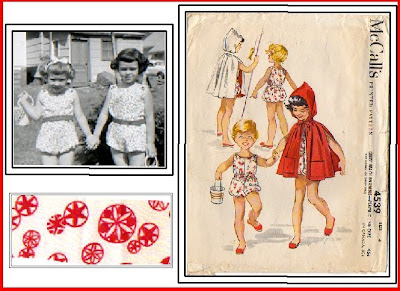 My mother was a talented seamstress and she saved everything! When my sister and I were recently cleaning out our family home, we found a stash of old patterns. Not only was I lucky enough to find patterns, but I also found a photo of me wearing the sunsuit that Mom had made. When I looked inside the pattern envelope, I almost fell over when I found a piece of the actual fabric that Mom had used.

The photo was taken in the summer of 1958...when I was 4 1/2! The cute blonde on the left is my cousin Diane. I'm the 'adorable' brunette on the right with the super short bangs! Do you think Mom could have cut the bangs any shorter???

I remember those cute plastic 'purses'. I thought I was pretty hot stuff that summer!!
Posted by Joanne at 3:09 PM 1 comment:

Growing up, I didn't look like anyone in my family. I have 3 sibilings, but I'm the only one with gray eyes, freckles, and dimples. My uncles often joked that I must have been adopted. One day when I was about 8, my uncle repeated the 'joke' again...this time, my petite Grandmother became angry. She stood up and pointed her somewhat arthritic finger in his face and told him sternly to never say that again! She reached out and gave me a big hug. I knew I wasn't adopted, but her reassuring gesture was very welcomed. 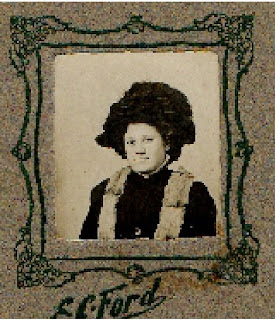 A few months ago, I was looking at old photos and came across one of my Grandmother (whom we referred to as Grandmaman, as she was French-Canadian and spoke no English). I tried to find the familiar face that I knew long after this photo had been taken. I covered the chin and starred at her eyes and nose and soon realized I was looking at a familiar face...MINE! I had finally found some family resemblance and was comforted to know that it was the Grandmaman that I had loved.

She was widowed after only 15 years of marriage, at age 39 with 9 children, and 8 months pregnant with her 10th child. She raised these 10 children, with help from her siblings, through the depression. There were many difficult years, but she perservered. She never remarried and lived to be 93 1/2.

Looking for a lost cousin 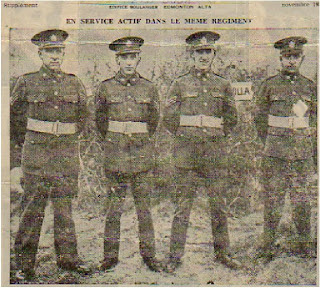 In 1942, my French-Canadian uncle, Georges Thibault, was serving in the military and stationed in England when he married an English woman, Helen Holmes. They married in Aldershot, England in 1942.

Sometime between 1943 and 1944, they had a daughter, Marilyn. Georges died in France in August 1944 when he stepped on a landmine, a hero of WWII. His distraught wife died within a short period of time after him...according to the family...she died of a 'broken heart'.

Marilyn was subsequently raised by her English maternal Grandmother. My French-Canadian Grandmother and her children were in contact with Marilyn while she was growing up. One uncle and aunt even visited her in England some years later. hen Marilyn was 18/19, she married Richard/Ricky Strange and came to Canada to meet her entire French-Canadian family. It was such a thrill to meet the cousin we had always heard about. I was about 8 years old when I met her and was in awe of her accent and never forgot meeting her. 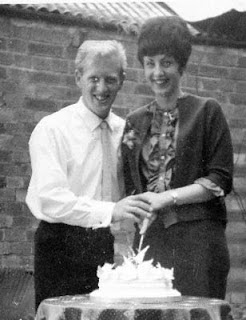 At that time, my Grandmaman proudly gave her military medals that Georges had earned...medals that my Grandmaman had proudly framed and hung in her home for many years. Grandmaman thought Marilyn deserved them..afterall, they belonged to the father she never knew.

A few years later, Marilyn divorced her first husband and married a man I believe was named Phillips (possibly Marc/Mark). They had a daughter, Victoria/Vicki sometime in the early/mid 1970's.

I wish I had other information, but somehow the relatives that had been in touch with her over the years, passed away and her whereabouts hasn't been known for many years. I have since researched our family tree and would be proud to give her information on her French-Canadian family. I'm hoping to find her...it's become my mission for 2008. She is now about 65 years old and might have grandchildren. I want them to know about their 'other family'.

I had a dream come true on July 4, 2008. My husband, our 2 daughters and I went to see James Taylor in concert in Tanglewood (Lenox, MA). I have always loved his music and have wanted to go for many years to see him. So this was the year!

He was exceptional as expected and near the end of the performance John Travolta appeared on the stage. No one was expecting that! He announced that James had recently celebrated his 60th birthday and we were all going to celebrate that evening.

The world reknowned cellist, Yo-Yo Ma came onto the stage. He and James performed "Sweet Baby James" together. It was a treat...only to be followed by the introduction of Carol King. WOW!! talk about another surprise. I must admit that her voice is not what it used to be, but it was still a thrill to hear her perform too.

Tanglewood is a neat place. It was my first visit. We had lawn seats and brought our chairs, blankets, citronella candles to keep the bugs away and enough food to feed a small country. I was prepared for any kind of weather and had rain gear...just in case! But the weather and bugs cooperated...the day/evening was perfect! 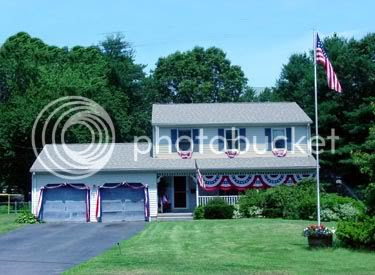 Posted by Joanne at 4:14 PM No comments: 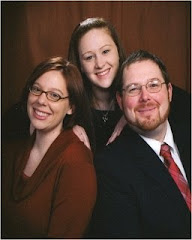 Proud mother of: Sara, Samantha and Scott (friends of theirs think this photo looks like it belongs in a real estate brochure!)